HoneyHeel is a rich, soothing cream for horses that provides a protective barrier over minor wounds and supports the natural healing process.

It is formulated with honey and natural minerals, naturally active agents that support the natural formation of healthy tissue.

The sticky consistency helps HoneyHeel stay in place, allowing the active agents to maintain contact with the skin. The addition of aloe vera enhances the soothing effect of the cream.

All of the ingredients in HoneyHeel are natural and have been chosen for their active properties and enhance the consistency of the cream. 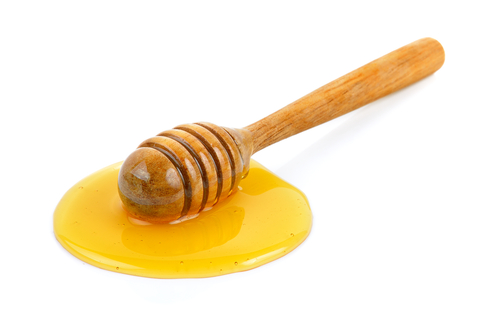 We use specially selected honey for its excellent beneficial properties and slow crystallisation, helping HoneyHeel keep its smooth consistency for longer. 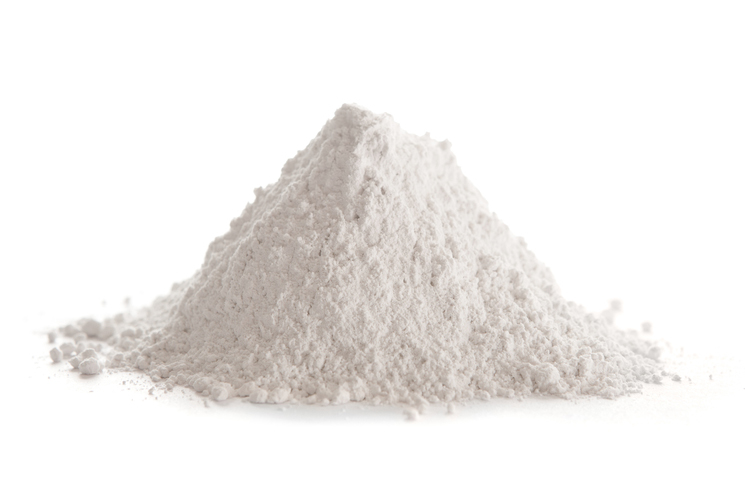 Powerful but gentle minerals for their active function and to improve the consistency of honey.

NOTE – these ingredients make HoneyHeel unsuitable for use on Dogs, due to danger of ingestion.

A moisturising juice with active properties that also helps to slow the crystallisation of honey, helping HoneyHeel keep its smooth consistency.

Added to slow the crystalisation of honey and enhance the effect and consistency of HoneyHeel. 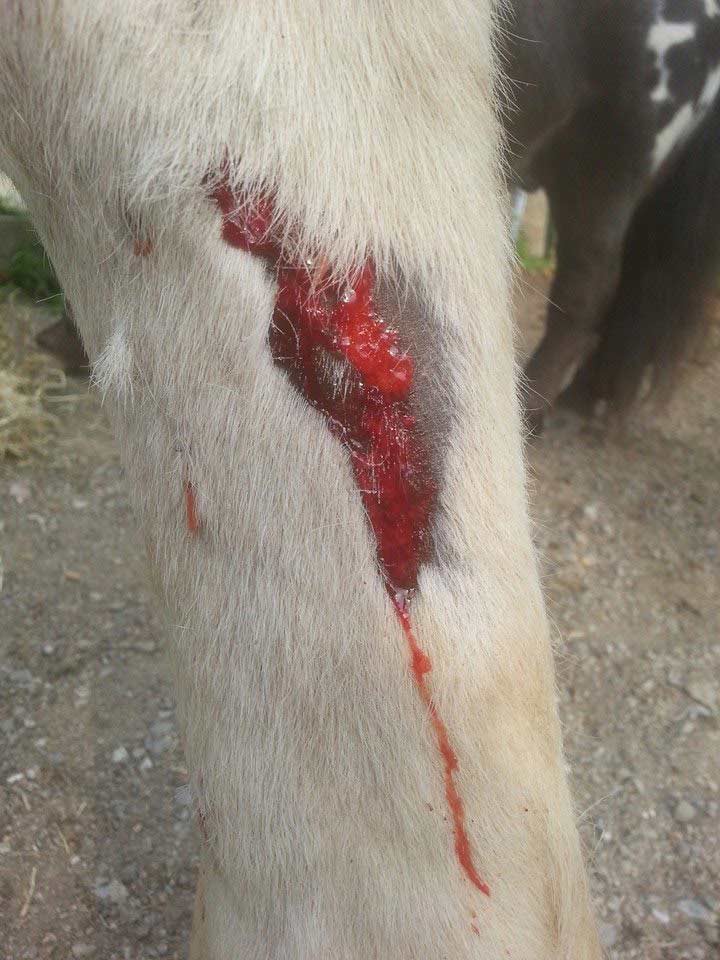 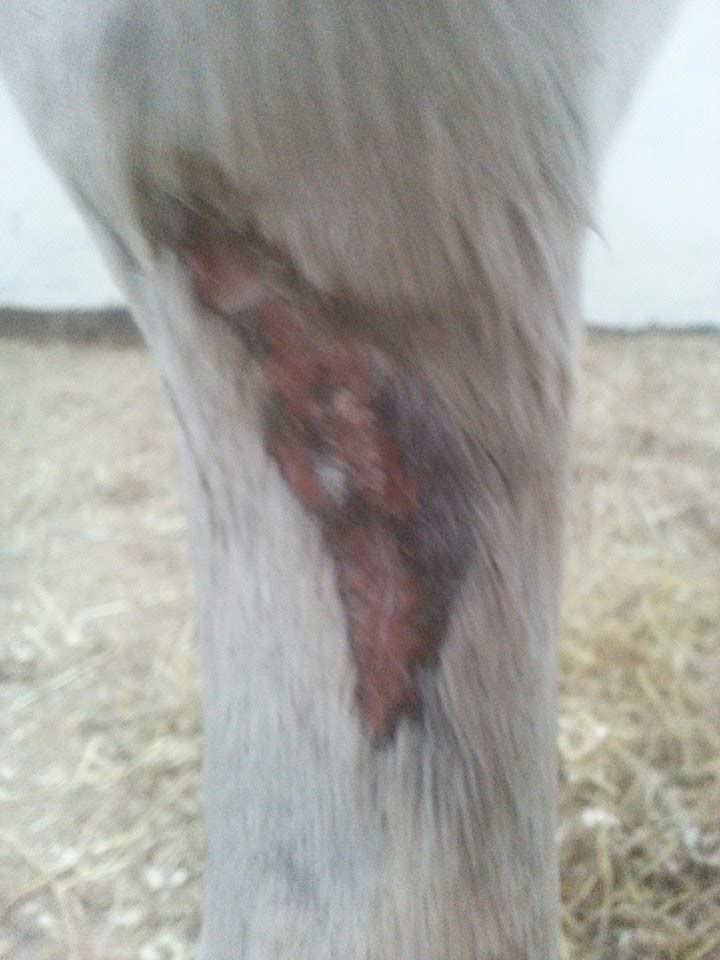 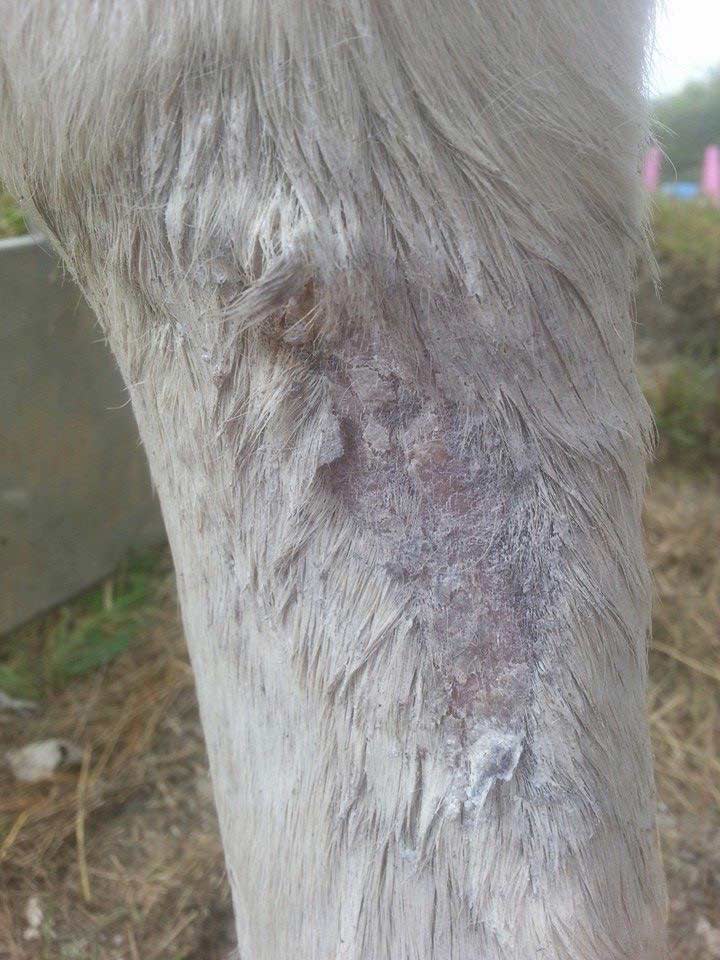 Gonet came in from the field with a nasty wound just below his hock.

After ensuring it was not requiring veterinary attention the wound was cleaned with salt water and HoneyHeel was applied. This was repeated on a daily basis.

Within 24 hours inflammation and pain had reduced considerably and within 2 weeks the wound had completely healed over.

“I was amazed by how easy the product was to use and how quickly it healed the area. I recommend this product and any Red horse product to anyone who will listen!” 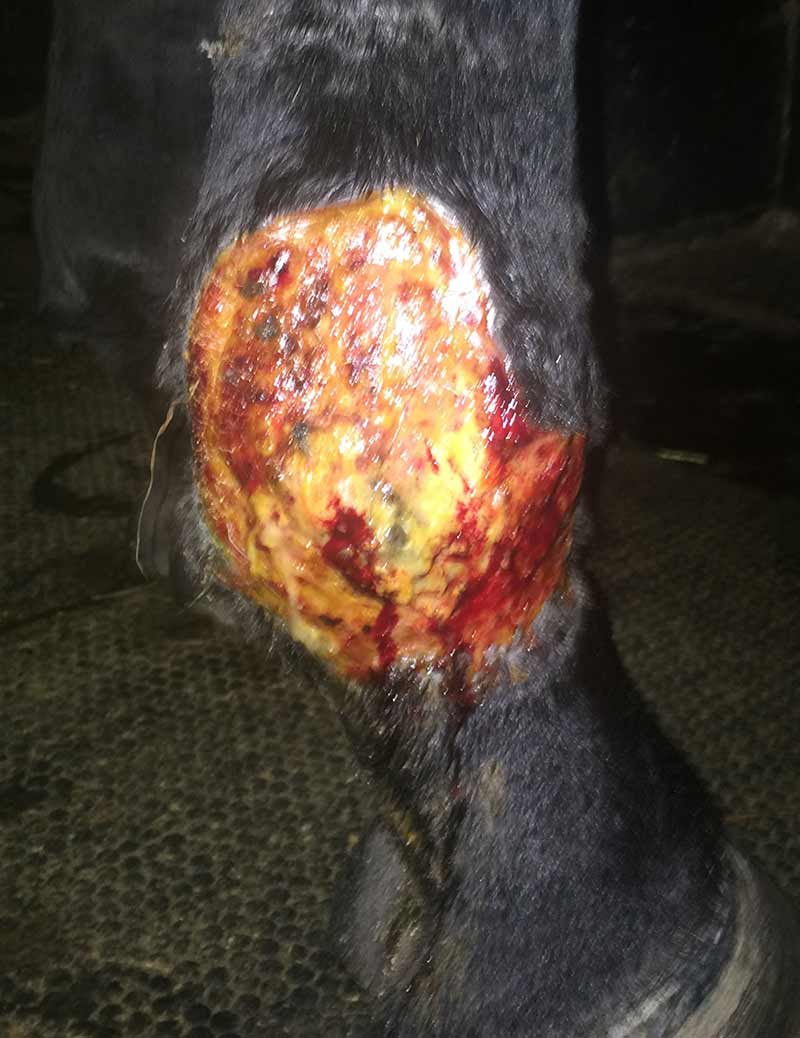 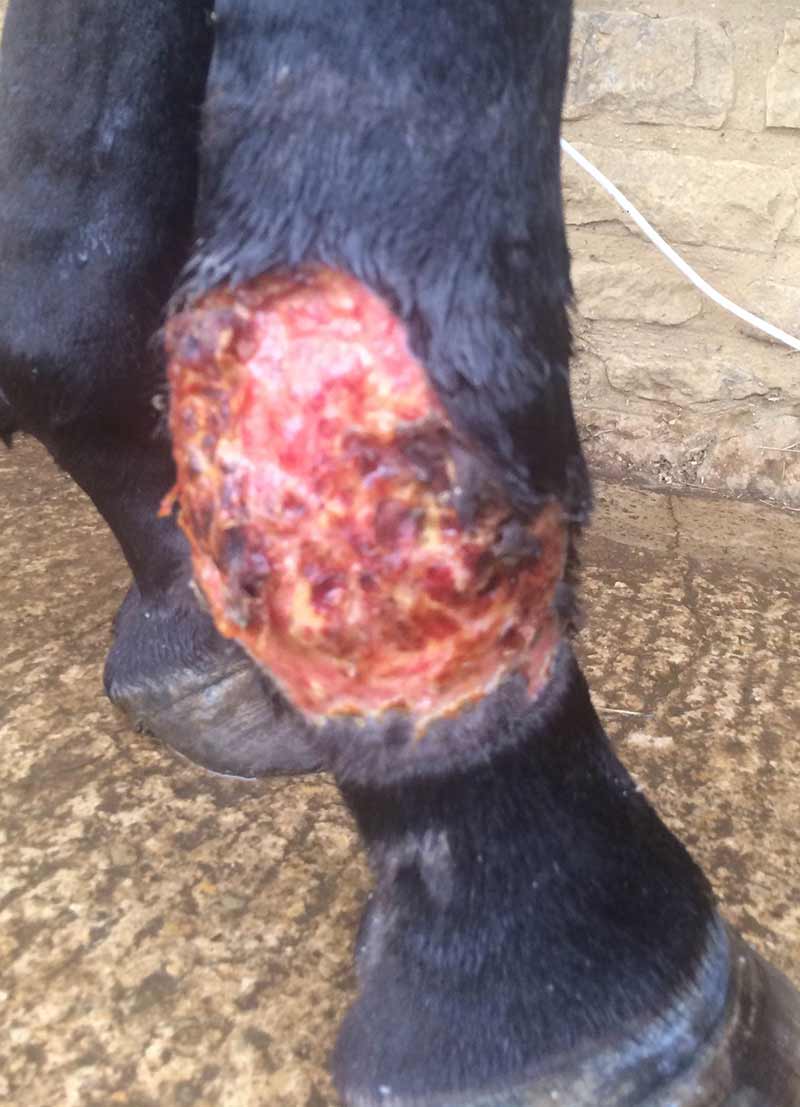 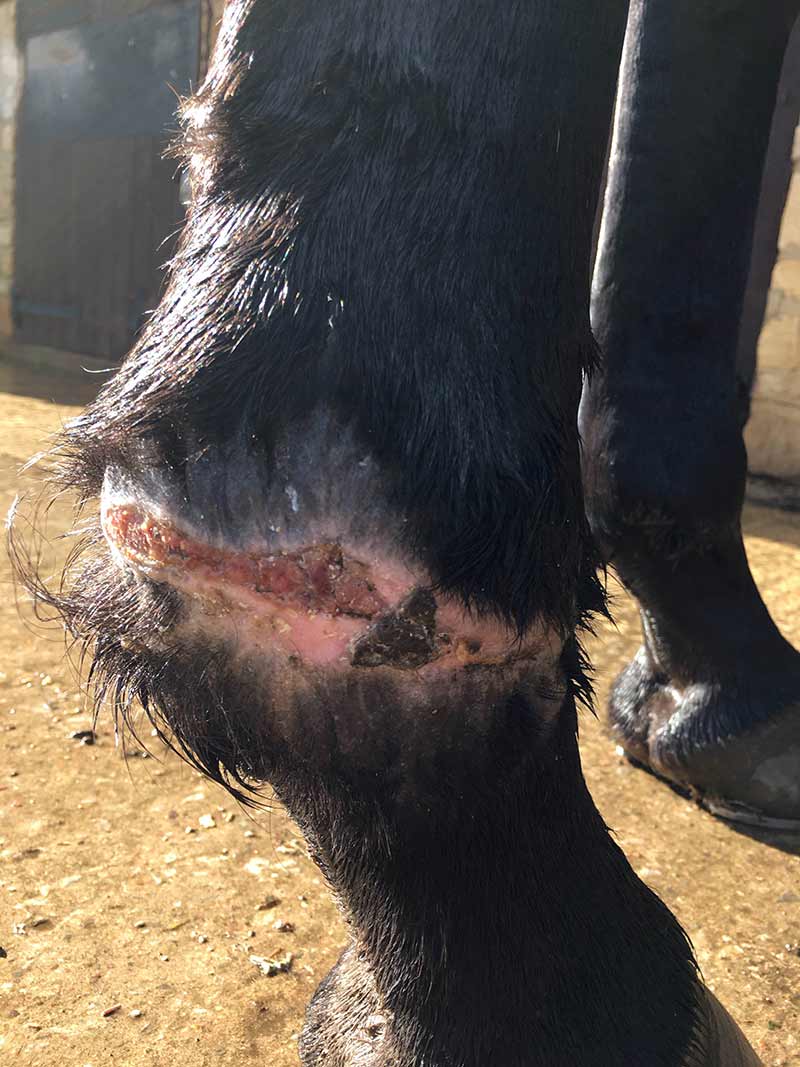 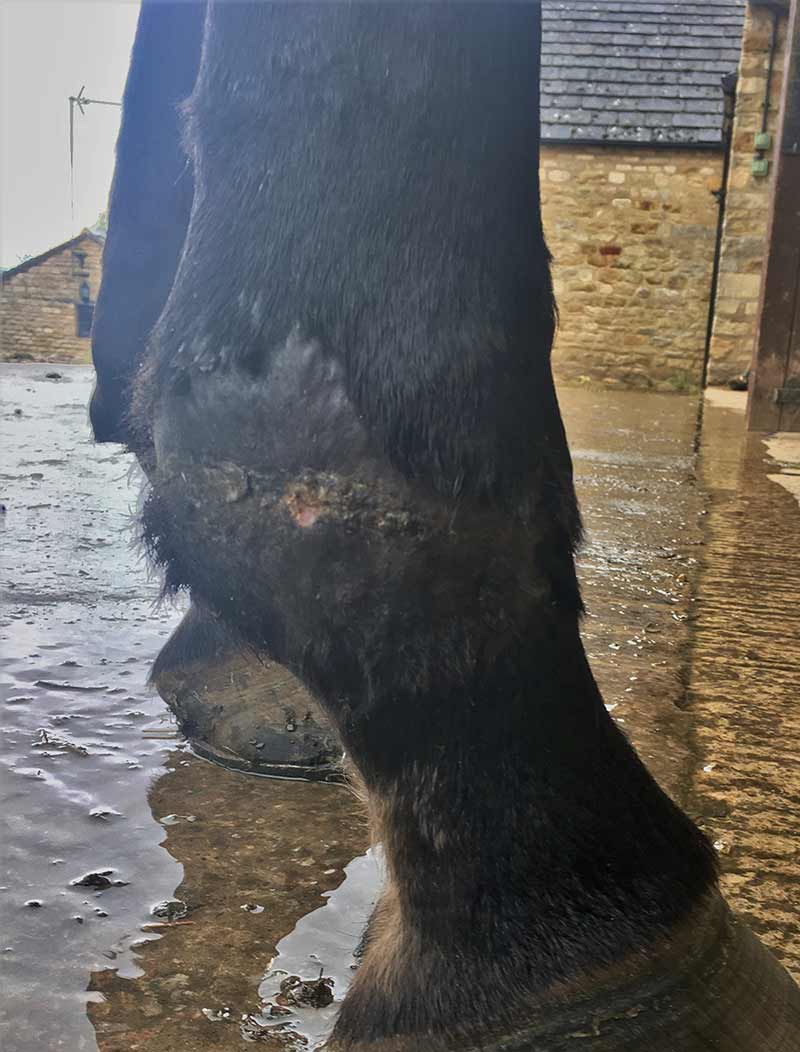 ‘Paul’ an ex-racehorse had a puncture wound which resulted in septicaemia in his fetlock. This resulted in him having to have surgery and joint flushing at the vets. During his aftercare the skin around the area started to harden and weep, eventually a large area of dead skin sloughed off. There was a distinct possibility that he would “never be right again” and it seemed likely he may have to be euthanised.

Manuka honey was initially used but it was found to be difficult to apply and would not adhere to the wound. Instead HoneyHeel was used on a daily basis to protect the wound from dirt, bacteria and to encourage the healing process.

The wound is now completely closed, leaving only a relatively small scar. Paul has increased work, been out on a fun ride and has been schooling over jumps.

“We can’t thank you enough for sending us the HoneyHeel. It’s been amazing in Paul’s recovery. Kept his wound clean and continued heeling more than we ever (and the vets) thought possible!” 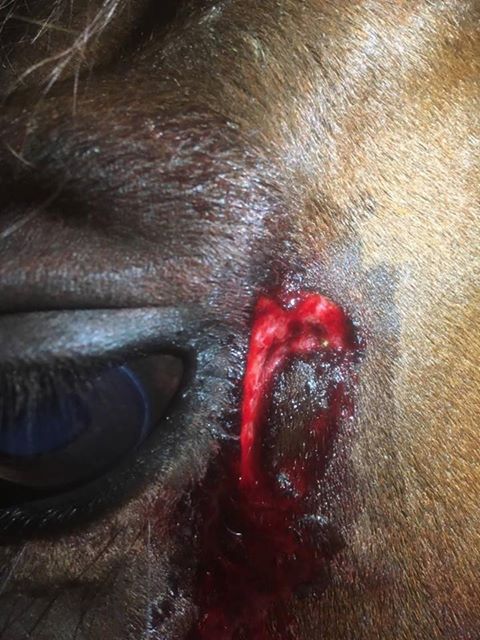 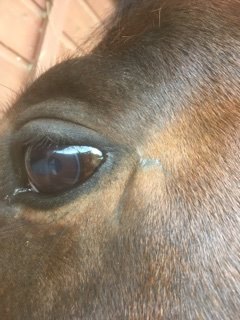 ‘Harry’ is a 6 year old exracer who I got straight out of racing as a 4 year old. He is barefoot and lives out as part of a herd of 5. We do a bit of everything and he is adjusting well to life as a normal ridden horse. Harry is your typical accident prone thin skinned thoroughbred who thinks it’s funny to injure himself and cost me loads of money in vets bills. The recent injury frightened the life out of me because it was so close to his eye. The vet said it should be stitched but was very concerned about how we would manage to sedate Harry enough to do it and then even if we had managed to stitch it, the wound would pull when he blinked. So we decided to clean it up and use antibiotics as most of Harry’s injuries swell up like a balloon.

The Vet suggested I apply a veterinary cream that he wanted to prescribe but I told him that I like HoneyHeel because it stays put and also provides protection from the flies which were a real concern at the time. The Vet read the ingredients and said that honey was a great product so we could use this instead.

I applied the HoneyHeel every other day and the injury took about 3 weeks to heal but both me and the vet are very surprised at how well Harry’s eye has healed. I can’t recommend this product enough! 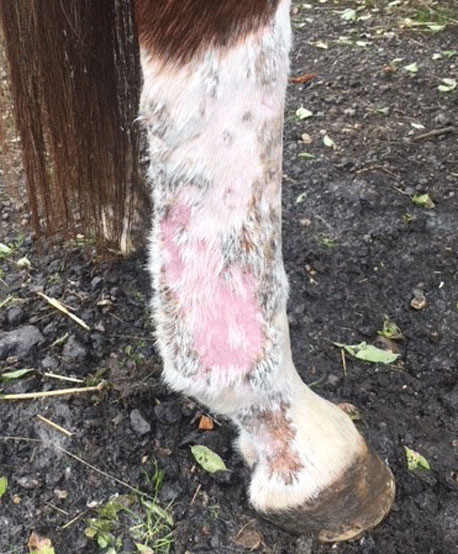 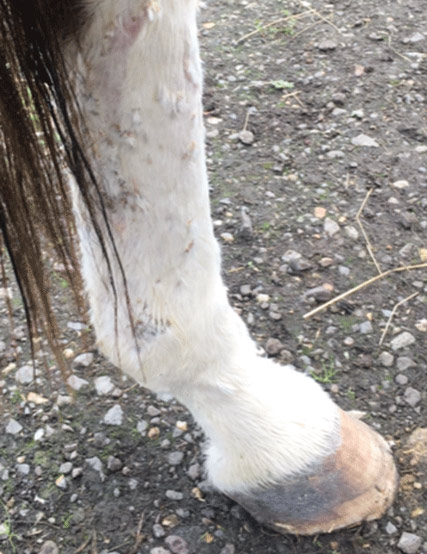 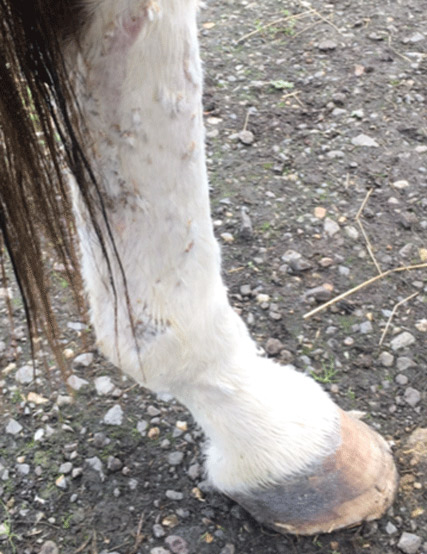 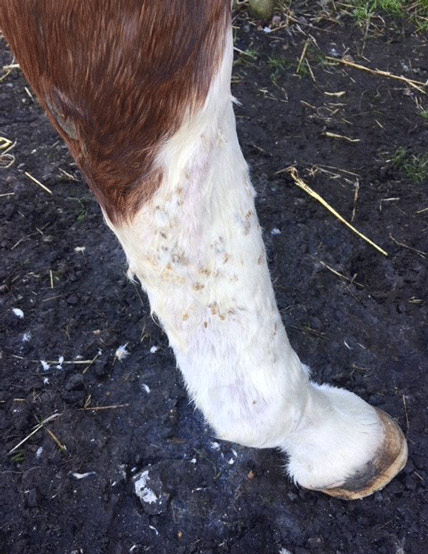 ‘Charlie’ is a 15 year old TB ex racehorse he is completely barefoot. Charlie had slightly scabby legs when  purchased in March 2017. They progressively got worse, at one point he went lame, he developed large areas of bleeding, weeping skin, on the white areas of 3 legs which made him very grumpy and at times difficult to handle.

Many over the counter products such as Muddy buddy, Mud warrior as well as Flamazine were tried.

After using Honeyheel a huge improvement  was seen in just over a week. Less bleeding and weeping, no fresh areas of infection.

The routine was to wash his legs once a week with Malaseb shampoo and warm water, leave that on for around 10 minutes to soften the scabs, rinse off with warm water and dried well. HoneyHeel was reapplied every 2 days until the inflammation and weeping  disappeared.

“I now always ensure I have a pot in my tack room as it is also perfect to use on cuts and grazes it’s quick healing properties can’t be equalled with any other product I’ve used.”

“I’m astounded at just how well HoneyHeel works, I’m truly happy as is Charlie, I have already been recommending it to other horse owners & will continue to do so!”

With thanks to Michelle Waudby.

‘Boss’ acquired a laceration on his hock in the field. It was cleaned and Honeyheel applied. The picture shows that 8 days later it is healing very well and caused no further problems.

Can I use HoneyHeel in deeper wounds?

We do not recommend it unless your vet has approved its use.

No, HoneyHeel remains safe to use indefinitely but may require gentle heating to achieve the correct consistency.

Should I remove scabs prior to first application?

Only if your vet has told you to. After a couple of days of HoneyHeel application inflammation has usually subsided and scabs soften, then it may be appropriate to remove them.

Do I need to wash HoneyHeel off scabby legs daily?

No, only if you think dirt is getting to the skin or the HoneyHeel needs to be reapplied for better skin contact. Too much washing may irritate the area.

My HoneyHeel has become grainy/ solid what can I do?

The sugar in the honey has begun to crystalise, it can be liquified again with gentle heating. Placing in a warm airing cupboard for a day or so will often return it to its creamy state.

Will HoneyHeel increase the risk of sun burn?

No. HoneyHeel being bright, opaque white is actually a very effective sunblock.

Surprisingly no. HoneyHeel has not been found to attract stinging insects and nuisance flies making it a very good way of protecting wounds in the summer.

Can I use HoneyHeel on other animals?

We have not formulated HoneyHeel for use on other animals so we recommend not. Some minerals in at are toxic to dogs for example. If it is used on other animals it is very important that it is kept well covered to avoid ingestion in case that species is sensitive to any of the ingredients.

Note: The natural ingredients in this product may cause it to crystallise. If this occurs, gently warm it and mix thoroughly until it is smooth and creamy.

“I just wanted to say thank you I have bought products from you for my horse and they have all been amazing especially HoneyHeel which more or less healed a big gash on my horses leg in just a bit more than a week! I recommend your products to everyone I can. Thank you again.”
Tracy Pope

“I simply cannot get over how effective your products are! I was introduced to Artimud last winter by my equine podiatrist to treat a rather persistent foot infection. The Artimud cleared it up in a week and allowed healthy tissue to thrive. Based on how pleased I was, I recently bought some HoneyHeel. Again I am gobsmacked at how effective it is at helping heal those little nicks and scrapes that they pick up in the fields.”
Jo Hartland

“Just writing to say I absolutely love your HoneyHeel, it has cleared my mares scabby, sore legs up in just a few applications, it has also worked wonders on a previous cut and was healed completely within 2 days! Keep making this fabulous stuff forever :)”
Catherine Adams-Bishop

“We have had fantastic results with HoneyHeal on horses with allergic reactions to buttercups – which resolved in just two applications. We are very impressed with these excellent products.”
Lucinda Mcalpine, Grand Prix Dressage & natural horse management pioneer.

“In the last 6 years I have used many different creams and sprays for the relief of scabby pasterns. I have used HoneyHeel on three horses recently and found it very effective and I would recommend it to anyone.”
Samantha Rance EBW BHSIntSM

“Hi, I don’t normally leave feedback for any product but felt I had to write and say what a wonderful product HoneyHeel is. I have a Clydesdale who had very bad dry skin on the backs of his knees and having tried every product known to man was no closer to getting rid of it. I tried HoneyHeel and after using it the skin was normal with no sign of dryness or flaking. I would definitely recommend this product to anyone with a ‘hairy” horse.”
Tanya Rodgers

“Redhorse products are amazing, only thing I use now. Live and die by HoneyHeel… My horse is usually smothered In it.”
Holly Frampton

“I also used Honeyheel on one of our ponies after a moody mare attacked him in the paddock and gave him a couple of superficial wounds. And again… Two days later his wounds had sealed and there were no flies or signs of inflammation in them. I highly recommended Honeyheel to all my friends in the stable. “
Camilla Podmore

Committed to using the most natural ingredients possible

Since we started Red Horse back in 2006, we’ve been committed to using the most natural ingredients possible, ingredients that are effective and yield great results while still being kind to equine hooves and tissue. This commitment is at the heart of our promise to our customers and is a core part of the brand and our business.

Because of this, we’ve always made a point of avoiding the caustic nasties and bulky fillers commonly found in many mass market products and have sought out and selected suppliers to enable us to deliver this promise through our range. 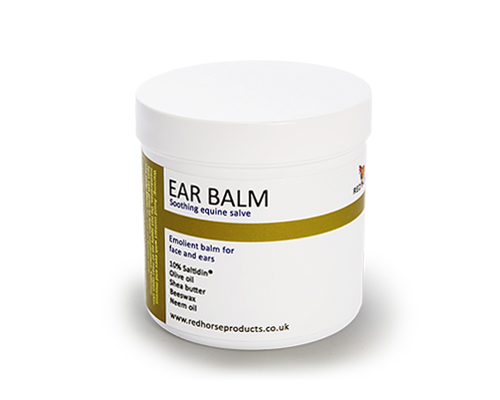 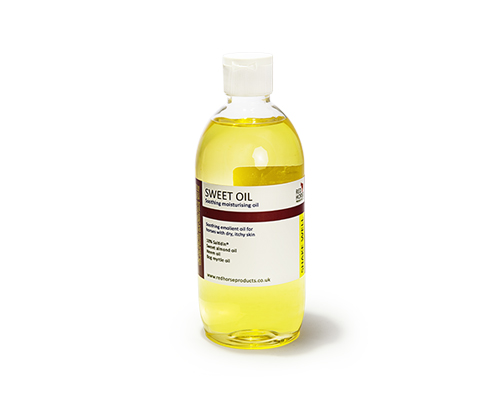 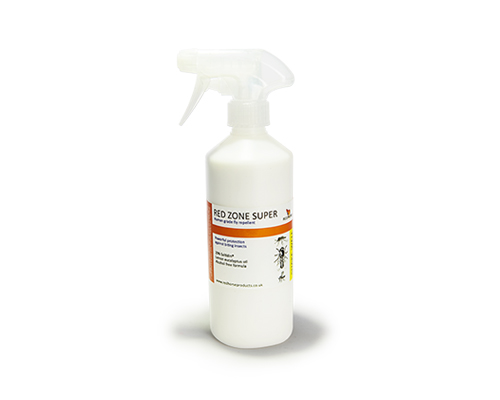